In this award-winning film, we discover the success of the Know Your Status project, pioneered by the Ahtahkakoop Health Centre in a remote region of Western Canada. Connecting with Care Ahtahkakoop was awarded the overall grand prize at the Global Hepatitis Elimination Film Awards. The prize money rewarded is being invested back into the communities profiled.

In the western Canadian province of Saskatchewan, along a winding dirt road and nestled between rolling green hills, is the community of Ahtahkakoop First Nation. Situated around a large lake, Ahtahkakoop is home to more than 1,600 people of the Cree Nation. But, the sheer natural beauty of Ahtahkakoop is sharply juxtaposed by the lack of services and opportunities on offer.

Ahtahkakoop has just one gas station with a convenience store. The health centre, a hall, the Band Office, the school, a police station and a rehabilitation centre are the buildings which make up the town.

People in Ahtahkakoop rely on private vehicles for transport and must travel half an hour for grocery shopping, while anyone needing to access care at a hospital will have to drive an hour to the city of Prince Albert.

Distance isn’t the only major challenge for people in Ahtahkakoop accessing adequate health care. Overcoming racism and stigma is just as confronting for many Indigenous people in Canada who have been subject to cultural assimilation and racial subjugation for much of their life.

Today, more than 150 years since the first treaties were signed between Indigenous nations and British colonial forces, First Nation peoples across Canada continue to experience racism and stigma. They also live with the inter generational trauma that is the result of cultural assimilation faced by previous generations.

Our experience in Ahtahkakoop is no different to any other First Nation in that we’re really feeling the effects of colonization, colonialism and assimilation. The social dysfunction we see in our communities today is, I believe, a direct result of that. The addictions and the HIV infection and hep C infections are results of root issues

Driving through Ahtahkakoop, one can’t miss the Ahtahkakoop Health Centre. While the range of services on offer may be limited, it’s made up for by the open-hearted staff who warmly welcome anyone that pops into the Centre.

The Ahtahkakoop Health Centre partnered with specialist Dr. Stuart Skinner from the community-based organisation Wellness Wheel to implement the Know Your Status project. It was a first-of-its-kind project, which created a safe and culturally connected space for people to be tested for HIV with full confidentiality and free of stigma. It also created an opportunity for the community to learn about unsafe practices that place people at risk of infection.

Following the success of Know Your Status, it expanded to also include testing and treatment for hepatitis C in 2016. This occurred at the time when new extremely effective medications, known as direct-acting antivirals (or DAAs) had entered the market, with a cure rate of 95% for hepatitis C. Prior to the new medications, treatments were much less effective, with lower cure rates and significantly stronger side effects.

In her early years, Jodie experienced drug dependence and through the shared use of injecting equipment contracted hepatitis C. Today, Jodie lives in Ahtahkakoop with her two children and works as a hepatitis C outreach worker on the Know Your Status project. She is passionate about her work, encouraging people to get tested and supporting those who are on treatment so they can also be cured like she was.

When I found out I had hepatitis C, I felt like I was the dirtiest, I felt like it was a death sentence, I felt like my life was over. Knowing that there was a cure, I was hopeful and I was determined to treat my hepatitis C

When Ahtahkakoop Health Centre staff notified Jodie of new medications that could cure hepatitis C, she decided it was time to attend one of their liver health events to have a confirmatory test and begin DAA treatment.

When she began DAA treatment, Jodie took one tablet a day for three months with no difficulties or side effects. Once Jodie completed the treatment, she went back to Ahtahkakoop Health Centre for follow-up blood tests which confirmed she had been successfully cured of hepatitis C.

In medicine, there’s only a number of illnesses we can cure and that we can get rid of. To see people’s faces and reactions and expressions, it’s fantastic

Being cured of hepatitis C has given Jodie the confidence to share her story with others in her community and across Canada in the hope that they too may one day be easily treated for hepatitis C.

One of Jodie’s clients through Know Your Status is Jodie Hyman. Outreach worker Jodie was able to embed a deep sense of trust and respect into her working relationship with Jodie Hyman, and as result she was able to be successfully cured of hepatitis C.

The success of Know Your Status

According to the team at the Ahtahkakoop Health Centre, the model of care that led to the success of Know Your Status is based on a number of key strategies, including:

From 2016 until late 2019, Know Your Status has successfully treated 488 people for hepatitis C. 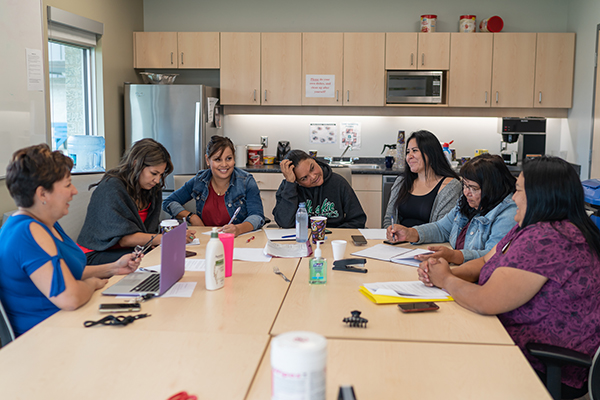